A wild conversation with the creator and star of Crazy Ex-Girlfriend, the smartest, sexiest show on The CW Network.

Q1: More than six studios turned you and your co-creator down before the CW picked up your show, and now it’s returning for another season as a critical and viral hit. Do you get recognised more now than before?

BLOOM: Either I don’t look the same on TV or people are just polite. When I do meet someone who recognises me, it means they watch the show, which, from an executive-producer standpoint — that’s what I care about. I’m like, Oh good, you’re watching the show! What demographic are you?

BLOOM: You can get away with saying all kinds of dark shit if you turn it into a bouncy musical number. When you’re doing comedy, music is your straight man. “The Sexy Getting Ready Song” is all about the brutal things women do to look hot and get in touch with their feminine side. My character, Rebecca, sings, “I’m gonna make this night one you’ll never forget” as she’s waxing hair off her ass. The chorus chimes in with “Ass blood”, and you see blood on camera. There’s no sub-text with songs. You just let it rip.

Q3: You shot an earlier version of Crazy Ex-Girlfriend as a pilot for Showtime that never aired. How much edgier was that?

BLOOM: It was mostly what we have on the CW. There was only one scene we had to re-shoot. Instead of a make-out scene, there was a hand-job scene, which I hope to release.

Q4: How much do you have to hold back?

BLOOM: We find work-arounds. It makes us more creative. There was a song, “Oh My God I Think I Like You”. Now, had I just done that song by myself, with no censorship, some of it probably would have been sung by my character as she was getting f*cked. You can’t show that. However, what we could show was her head getting pushed down for a blow job. Pretty f*cking close. So rather than try to be cutesy, we push the envelope as much as we can. And then when we can, we do a dirty version.

Q5: Your song “Heavy Boobs” is about having double-Ds, each with “the volume of a toddler’s head”. They are “dense like dying stars” and “they each have their own memoirs”. What would your heavy boobs say in a tell-all?

BLOOM: When you have big boobs, you’re a sexual object even when you don’t want to be. I would walk down the street in New York in just a T-shirt and get catcalls. I know men don’t understand this, but getting catcalled is the worst feeling in the world. It truly feels like you are being physically violated. Boobs sexualise you when it’s not on your own terms. Then there’s the physical part of it: Having these giant sacs on your body can be painful. They’re tied to your hormones, to your reproductive system. PMSing is a real thing, and it can be awful. Boobs are not just these disembodied bags of fat to be used as playthings for guys. That said, a gentle touch goes a long way. For guys in relationships with big-boobed women, I’d say err on the side of being tender, unless she specifically requests you to really grab them and mash them.

Q6: Do you feel at all competitive with other women in comedy?

BLOOM: I feel competition only when other people point it out. You read these weird headlines, like MOVE OVER, AMY SCHUMER, or MOVE OVER, TINA FEY. Why move over? Can’t we all just stand here together? The only time I get a twinge of something is when there’s content overlap. We wanted to do a song recently, and someone in the writers’ room pointed out that it had basically already been an Amy Schumer sketch, so we scrapped it. For a second you go, “F*ck, she got to it first!” But do I wish she didn’t exist and that I was the only woman doing comedy? Absolutely not.

Q7: You were an intern at Saturday Night Live. What did you learn there?

BLOOM: I remember watching a ton of Real Housewives and waiting for stuff to do and seeing the writers sit around and write like me and my friends did, and thinking, There’s no difference between me and my friends and these guys. I used to think there was some secret they had or some key to the castle. No, they just had more experience. It was just them getting better.

BLOOM: He was getting on in years, yes. But I was inspired after reading The Martian Chronicles. Also, I find smart people and writers to be very hot. I never went for men because of their looks.

Q9: So much of dating today is about swiping left or right based on profile pics.

BLOOM: I used to be attracted to guys who were very tall, very lanky, almost to the point of being feminine. Those guys were not always great for me personality-wise. They tended to be kind of reserved and have a rigid nature about them. I’m glad I’m married now, because if I was dating based on my physical type, I’d be swiping at men I shouldn’t be swiping.

Q10: On the show and in your social-media feeds, you switch from looking model gorgeous to strutting around without make-up in your Spanx. Is one closer to the real you?

BLOOM: I’m self-conscious when I’m supposed to look pretty or neutral. I watched a scene where I’m in a bar, and I noticed I had a muffin top. I was like, the song we’re doing is not called “Look at Me and My Big Ol’ Muffin Top”. But there was nothing I could do. People have muffin tops — great. Just like when my character is depressed, she should have no make-up on. I go to all these red-carpet events, but it’s all an illusion. Anyone being glossy and pretty, with their hair done and make-up done — it’s mostly fiction. On the inside, we’re all humans filled with guts who poop and fart.

BLOOM: Around the house it was “f*ck, f*ck, f*ck, f*ck”. As an only child, you become like your parents’ idiot sidekick, so we all talked that way. They were also okay talking about sex, and that openness made me feel in control of my sexuality. First of all, I have the good fortune to not have been raped — something that happens to one in four women. That’s just f*cking luck. I lost my virginity in college and never had sex with a guy before I was ready, because I knew what sex was; I knew the realities of it. I have no problem talking about sex. I have boundary issues in that I have none.

Q12: Was anything off-limits with your parents?

BLOOM: Talking about my anxiety and depression. I didn’t want to be a burden on my parents, and when you have that darkness inside you, it feels very shameful. Eventually I found that the more you share it, the more a weight is lifted. That’s why I like exposing secrets. If you don’t, you’re repressing things. Fear leads to hate, hate leads to the dark side. I’m completely bungling the Star Wars quote, but it’s all connected. If we were all more open, we wouldn’t be so ashamed that we have insecurities and that we watch porn, and a lot of problems would go away.

Q13: What kind of relationship do you have with pornography?

Q14: How would America be different with a woman in the White House?

BLOOM: Women, to use the most gross generalisation, do what’s good for the team. They do what’s best for the greater good, and that would be good for the country. I see this on my TV show, where most of our department heads are women. If you say to a male costume designer, “This needs to be changed because it doesn’t work with the writing”, sometimes they’ll be like, “You’re wrong. I have an Emmy, so, um, no”. Then you have to really serve the ego. “Oh yes, we know you have an Emmy, but could you just do this one thing, pretty please?” If you say to a woman something needs to be changed, she’ll go, “Okay. Done”.

BLOOM: There’s this group called the Apple Sisters who are just fantastic. They do a 1940s-type radio show. They’re amazing. Zach Sherwin, who writes a lot of the raps for our show, is fantastic and should be famous. I know the Lonely Island is famous already, but I love them.

Q16: What’s coming up this season on Crazy Ex-Girlfriend?

BLOOM: The theme of season one in the writers’ room was the lies we tell ourselves. The theme of season two is that change is hard. Rebecca’s not in denial as much anymore. She has admitted to Josh that she moved to California to be near him. You can’t unsay that, and now we can play with the premise of the show in a way we hadn’t been able to before.

Q17: What would you put out there if you didn’t have to worry about standards and practices?

BLOOM: It’s funny. I did a comedy-club show at the Largo in Los Angeles, and I was going to do “Heavy Boobs” wearing just pasties. I pitched that idea to my friend Jack, and he said, “That’s awesome and so funny, but just know that it will live on the internet forever. Whenever someone googles you, they’re going to see you in pasties at a live show where you didn’t have to be in pasties”. I thought, maybe I want to hold off on that until it’s really important.

Q18: What would qualify as important enough for pasties?

BLOOM: Maybe a big benefit performance rather than a regular club gig. It’s something I’m not opposed to doing. I just want to wait for the right moment. Same with the internet. I’m not going to post topless pictures of myself, because that’s a boundary that I do have. I don’t want people to see my bare tits unless it’s for a good reason.

Q19: Life is going well for you. Any new mountains

BLOOM: People ask me, “What’s next for you?” and I think, what do you mean what’s next? This was the thing. Not that I have no other ambitions. There are things I want to do. After doing a lot of these talk shows — Colbert, Seth Meyers, Kimmel — I would love to be a person in late night. I would love to host a late-night or variety show. I wouldn’t do a topical opening monologue. I would make it much more variety-based.

Q20: Who would be your dream guests? 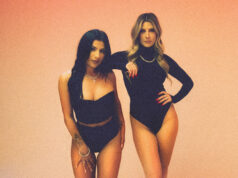