Nothing quite like the sun during a Mediterranean Summer. Basking on the beach. Looking at the ocean’s crisp blue hues. Well, we were doing neither. We were stuck outside the Barcelona-El Prat Airport (or just Barcelona Airport) in 35-degree heat while our chaperone, already an hour late, made his way through some sticky Barcelona traffic. My editor, getting crankier by the minute, mumbling something about the Wi-Fi signal and his missing medication was not helping either.

However, at that precise moment in rushed chaperone in his rented black VW Passat with a mouthful of excuses and apologies. Immediately we took a liking to him as he had this laissez-faire Cape Town coolness about him and had us in hysterics from the moment we met. Our chaperone was the Marketing Manager for Monster South Africa and we were going to be his guests for the week. An ex-competitive mountain biker, he knows all there is to know about the action sports world and proceeded to give Ed and I the full run down, also including the inside track to the colloquial slang, with words like “INSANELY”, which presumably means more than “Insane” when describing a trick, propulsion speed or even some of the gorgeous Spanish women. Ed at this stage had found his meds and calmed down. We were well on our way to having an epic trip to cover the Moto

GP, sponsored by Monster Energy. After our dinner of delicious tapas and Spanish beer we take a walk around Barcelona to find a quaint gelato stand to end off our night.

Ed and I set off on what would become our morning ritual. A jog down to the warm Mediterranean Sea to get our exercise in before the real work commences.

In sport mad Spain, MotoGP has a cult following with fans flowing in from all over the country. The entrance to the stadium was absolutely manic as bikes and buses started queuing to get in, people even opting to sleep on the track grounds for the weekend. Faces painted, shirts off and chanting their heroes names. Almost all weekend you could hear “VALE VALE VALE” as Valentino Rossi made his way around the pits or signed autographs for fans who were willing to wait hours just for a glimpse of the man. Screeching engines and 1.8m-tall pit lane girls aside, this is what started my romance with the sport that is MotoGP. There was a sense that the riders were humble and appreciative of the throngs of people which made this all possible, which isn’t always evident at every sporting event. If you can believe it, this mayhem was only for the qualifying sessions. The excitement of the race day was now hanging thick in the air and people were jostling to place their bets and get in on the action.

Not to miss out on any action ourselves, we had a quick shower and joined the 15-strong Monster Team on a night out on Las Ramblas. The infamous tree lined party venue located in the centre of Barcelona which 15 is minutes from our beachfront hotel. We walked the main road for some time and then ducked into the Plaça Reial (Reial Catalan for royal). Built in the 1840s in order to extol then monarch, King Ferdinand VII. The elegant ambience of the Plaça Reial is accentuated by a beautiful fountain, street lamps and palm trees, and it is one of Barcelona’s busiest, most vibrant spots, particularly at night. We had the pleasure of being treated to Ocana Cocina Mediterranea, an exquisite seafood restaurant which has smacks of Cuban architecture alongside some eccentrically dressed patrons. Clearly the place to be. Ed was puffing on a gloriously sized Cohiba which would have made Escobar do a double take. It was truly a night to remember. Knowing that we had an early wake-up call, we fought our way through the late-night cocaine and sex purveyors, jumped into a taxi driven by what seemed to be a disgruntled old

Formula 1 Test Driver who hurtled us back to the safety of the Hilton Barcelona.

Dude, where is my car?

After getting back to the hotel the previous night, our chaperone had decided 1am was too early for bed and proceeded to don his “gambling shirt” and take the Casino Barcelona for a dance and returned home R3 000 richer. We were busy sharing in his excitement when we realised that the rented black VW Passat was no longer parked in front of the hotel (a spot our he had assured us was legal). Turns out the Spanish Traffic Cops had decided to tow it away, resulting in a R4 000 fine for our now, not so excited chaperone. Now I’m no mathematician but I think he came out losing that exchange with Barcelona.

Nonetheless, we were too on edge to continue laughing at our chaperone, so we jumped into our newly hitched ride and made our way hurriedly to the main event of the weekend. The place where legends are made and records are broken, the spectacular Circuit de Catalunya. This FIA Grade 1 track holds a staggering 140 000 spectators which is over 40 000 more than arguably Barcelona’s biggest and most famous sporting attraction, Camp Nou the home of Barcelona FC. Built in 1991, it is one of the only tracks to host a Grand Prix in the very same year of being built. A track graced by some of the greatest names in motor racing, such as the late Ayrton Senna and Michael Schumacher.

Entering the track we were greeted by what can only be described as world-class pandemonium as the Monster Girls took to the stage surrounded by thousands of adoring fans, they stripped down to bikinis and jumped into a raised jacuzzi only making the crowd go wilder. Alongside them were the likes of BMX and MTB Freestyle Champions Adolf Silva and Clemens Kaudela doing Supermans, backflips and even Adolf’s double backflip on the dirt ramps encircling us. The crowd revelling with every landed trick while the Monster Girls danced their choreographed routines to perfection. Flame throwers and confetti rockets littered the sky. Completely overwhelmed by the spectacle of it all, Ed and I screamed at the top of our voices, INSANELY.

With the race now well under way, we took to our hospitality tent to watch “The Doctor” Valentino Rossi, riding the now famous No 46 bike, do what he does best. Watching these men stylishly wind their way around the 50-degree black snake of tar at speeds north of 300km/h, makes you feel somewhat talentless but that didn’t stop us from giving our opinions on which lines they should have taken or how bad their pit strategy was. Out on the media balcony my ears could not stand the sound of these mechanical masterpieces as they threw decibels at me, forcing me to go back inside into the air-conditioned tent. This was a memory to tick off my bucket list and as the event drew to a close, we knew that this would not be the last time, as we would make every effort to return again in the future. I was completely humbled and grateful that life had allowed me to experience this.

After a team lunch and some more Spanish beers we all reminisced on the weekend we had experienced, a comradery second to none had formed as we shared stories of Las Ramblas, towed vehicles and the warm hospitality of the Spaniards. The trip back to our hotel was bitter sweet as we realised it was all over, we were however exceptionally grateful. Grateful to Monster for taking us on this trip of a lifetime, grateful to Barcelona for its beauty and even to the rented black VW Passat which had carted us back and forth in safety.

It’s not often we get to do these trips and as fun as they are they also make us appreciate the great weather and experiences our own country has to offer. This was at the forefront of my mind as Ed made his way to Dubai for some family downtime and Carlos (Ryan) made his way to Cape Town. We hit some last-minute shopping at one of Barcelona’s many malls, bought some presents for the significant others and made our way back to the airport where only a few days prior we had been left stranded. Leaving Pedrosa, Marquez and Rossi in our dust we boarded the A380 quite disappointed that we had only learnt one Spanish sentence, “El burro sabe mas que tu” which quite literally means “Donkeys know more than you” and you would be surprised as to how many times we used that during the trip. Farewell Spain, see you soon. 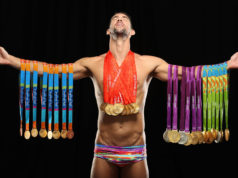