The fallout from Sean Spicer’s ill-advised Emmys cameo continued to reverberate through Hollywood Monday, as a certain CBS host was forced to do some very public self-reflection.

There was no way James Corden could get through Monday night’s episode of The Late Late Show without addressing the viral photo of him planting a big wet one on Spicer’s cheek. But rather than show all-out contrition for getting chummy with the man who tried to convince the country that 3 million people voted illegally in last year’s election, Corden did that thing late night hosts do when they want to seem serious, but not too serious. 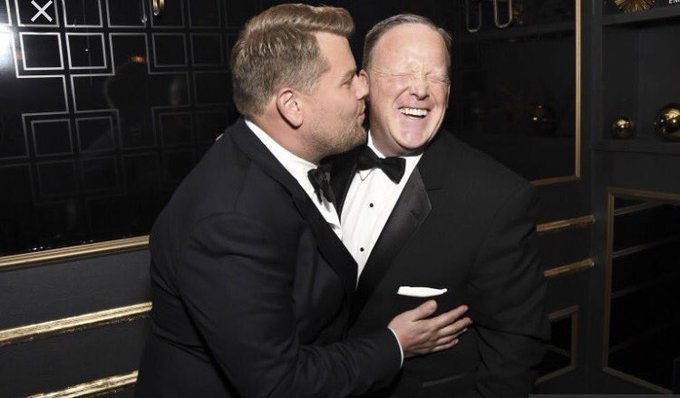 Corden alternated between humor and introspection while trying to explain his behavior. “The big winners last night were Donald Glover, Hulu, and former White House press secretary Sean Spicer,” Corden said. “Spicer won best actor in a comedy for his role in Donald Trump’s administration. I’m kidding, of course, but Sean Spicer actually did make a cameo at last night’s ceremony, and according to some reports, at the after-party Spicer was the most popular guy in the room. And I just want to say, I think people are forgetting that this man lied to the American people and should not be embraced. These Hollywood phonies kissing up to Sean Spicer are disgusting. I mean, who did this? Who are we talking about here?”

That’s when the infamous photo flashed onto the screen, and Corden launched into one of the finest non-apologies in recent memory. “Now, I know you think that’s a picture of me kissing Sean Spicer, but in the spirit of Sean Spicer, no it isn’t,” he said. “Anyone ever have that feeling when you get a little drunk and then wake up the next morning and think, ‘Oh God, who did I kiss last night?’ It’s a bit like that. To be fair, everyone was kissing ass last night at the Emmys; I just happened to kiss the biggest one there.”

After getting the requisite jokes out of the way, Corden decided it was time to repent, telling his audience that he’s “disappointed” by his behavior and that he’s heard all the criticism loud and clear. But instead of explaining why it’s inappropriate to partake in the normalization of anyone who’s been complicit in furthering Trump’s agenda, Corden decided that more self-deprecation would provide the quickest path to absolution.

“I can promise you this: that kiss was a one-time thing. I’m not one of these people who has a couple of drinks and goes around kissing people that I don’t know. Except for that one time with Joseph Gordon-Levitt,” he said, before rattling off a slideshow of all the celebrities he’s been caught smooching.

It was difficult to decipher whether Corden genuinely felt that he had crossed a line, or if he was simply trying to get in front of a scandal that could potentially tarnish his sparkling reputation. We saw what happened to Jimmy Fallon after he touched Trump’s hair on national television and failed to address it for months after. His reputation (and ratings) still hasn’t fully recovered.

And what about Stephen Colbert, whose idea it was to enlist Spicer’s services in the first place? There’s no telling what kind of lasting impact Spicer’s Emmy appearance will have on Colbert’s personal brand, which is built on his anti-Trump persona. For now, Colbert isn’t talking. A source close to the host told Vulture that Colbert wanted to publicly shame Trump by re-litigating the inauguration crowd-size lie. “We made him the joke,” the source said. “We made him the joke at the Emmy Awards.” It’s a pretty flimsy cover for what was essentially a ratings grab. In Hollywood, celebrity is the most powerful currency, and right now, Sean Spicer is the richest man in town.