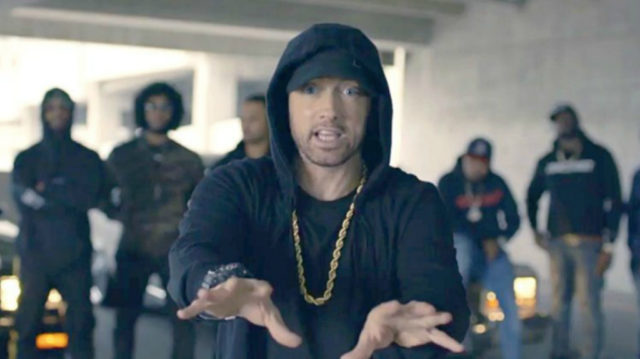 We never thought we’d say this, but Taylor Swift could learn a thing or two from Eminem. When the Detroit rapper unleashed a blistering anti-Trump cypher during Wednesday’s BET awards, he not only risked losing a huge swath of his fan base, but openly disavowed his Trump-supporting acolytes: “And any fan of mine who’s a supporter of his/ I’m drawing in the sand a line, you either for or against.”

Em’s four-and-a-half minute verse was a fiery polemic in which the rapper destroyed Trump for his most glaring transgressions, from his continued stoking of our collective nuclear anxiety, to his war against Colin Kaepernick and the NFL.

This wasn’t the first time that Eminem used his pinpoint lyricism to eviscerate the president. On his song “Campaign Speech,“ which dropped during last year’s election, he rapped: “You say Trump don’t kiss ass like a puppet / ‘Cause he runs his campaign with his own cash for the fundin’ / And that’s what you wanted / A fuckin’ loose cannon who’s blunt with his hand on the button / Who doesn’t have to answer to no one—great idea!”

Despite his very open disgust with the president, he hasn’t exactly been a face of the resistance, either. The 44-year-old rapper is in the twilight of his career, and when he does emerge form his self-imposed exile, like in HBO’s recent documentary The Defiant Ones, he doesn’t move the cultural needle the way he did when he was at the height of his powers. That might change after Tuesday’s screed, which was retweeted 64,000 times in two hours, and even got some Twitter love from Kaepernick himself.

Celebrities lashing out against Donald Trump is nothing new. The only difference is that when it’s coming from the likes of George Clooney and Meryl Streep, their words rarely resonate beyond the liberal echo chamber, with Trump’s supporters using them as yet another example of privileged Hollywood elitists who are woefully out of touch with the tenor of the country.

That’s what makes Eminem’s Trump diss so vital. Remember, he came up in the streets of Detroit, in a state that voted Trump and that’s also home to one of the president’s rare celebrity supporters, Kid Rock. While many rappers have come out against Trump, Eminem is the first one whose fan base is predominantly white and based in rural parts of the country, as the New York Times once pointed out. While it would be presumptuous to think that Eminem’s rap will help tilt any elections, let’s never underestimate the power of fandom. After all, f anyone has an influence over his most ardent followers, it’s this guy.