According to a federal study, two-thirds of men don’t wear condoms (and more people than ever are using the pullout technique), an insight that is not only surprising, but dangerous. With such concerning numbers, the state of unsafe sex in this country is seemingly becoming an epidemic.

A Boston-based company by the name of ONE Condoms is hoping to curb these concerning figures with the launch of myONE Perfect Fit condoms, bespoke condoms that are custom fit to your penis like a tailored suit. According to internal research, the company found that more than half of men have lost an erection due to poor fit. “The number-one complaint we hear is that condoms don’t fit and are uncomfortable,” ONE Condom’s CEO, Davin Wedel, tells Playboy. “Which is why we believe proper fit is the next evolution in helping increase both condom use and pleasure.” Wedel adds that standard condoms properly fit only 12 percent of men.

ONE Condoms offers 60 sizes, 10 lengths and nine widths. Within four hours of launch, they’d sold every size offered. Though the Wedel’s company has been around since 2004, the innovation was only recently made possible due to changes from the Food and Drug Administration. But still, approval was far from easy.

As the New York Times notes, attempts to improve condoms have fizzled mostly due to cost of testing, an FDA requirement. You may recall a competition in 2013 sponsored by the Bill and Melinda Gates Foundation that called for better, more pleasurable condoms. To this day, not one of these prototypes has been brought to market.

A key priority was to offer men smaller sizes. As it stood, standard condoms had to be at least 6.69 inches long. But the average erect penis is roughly an entire inch shorter than that, a study from Indiana University found. After studying 1,661 men, sexual health expert Debby Herbenick found that 83 percent of guys are smaller than the standard condom. According to Herbenick, the rule of thumb in the commercial industry is that condoms have to be long enough to fit most men and the excess length is supposed to be rolled up for those who fall short. A show of hands: Who’s ever cuffed their condom to fit their penis?

To find their ideal size, customers use a FitKit (a free printable measuring tool with instructions) to measure their length and circumference. They then receive a product code that corresponds to their myONE size. Customers can also get a size recommendation based on a questionnaire on previous condom experiences. People searching for their myONE Perfect Fit size can order a free sample kit, including the size they measured plus a size smaller and larger to find their true perfect fit. The custom fit condoms come in lengths of 4.9 to 9.4 inches and circumferences of 3.5 to 5 inches. Standard condoms are typically 6.7 to 8.3 inches long and 3.9 to 4.5 inches in circumference, according to figures reported by the NYT.

How should a condom fit? We went straight to the source. “The ideal fit should feel pleasurable, with no squeezing, pinching, slippage or excess rolled latex,” Wedel says. “For the length, a condom should cover the entire shaft, without having too much extra material that needs to be rolled up. Otherwise, that extra length can cause a rubber-band effect at the base of the penis—resulting in tightness and discomfort. If the condom does unroll, the extra length can hang off the tip of the penis and potentially cause it to slip or be pulled off.” When it comes to girth, Wedel insists it’s up to the wearer’s personal preference. “Ultimately, the condom should fit snugly in place without causing tightness or discomfort.”

While the price for myONE condoms is higher than your standard rubber, they’re still surprisingly affordable. The most cost-effective option is to purcahse the 24-pack subscription, which works out to 66 cents per condom and two-dollar shipping.

While the relatively quick success of myONE condoms might support the position that men will more likely wear condoms if they’re comfortable, myONE is still a condom and will therefore rob sensation, another huge reason so many men forgo rubbers. Nonetheless, it’s nice to hear that companies like ONE Condoms are working hard to make penises more comfortable while practicing safe sex. Because the truth of the matter is, no matter how much you hate them, condoms are a man’s only relient mode of protection against STDs other than abstinence. 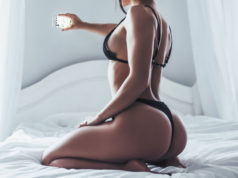