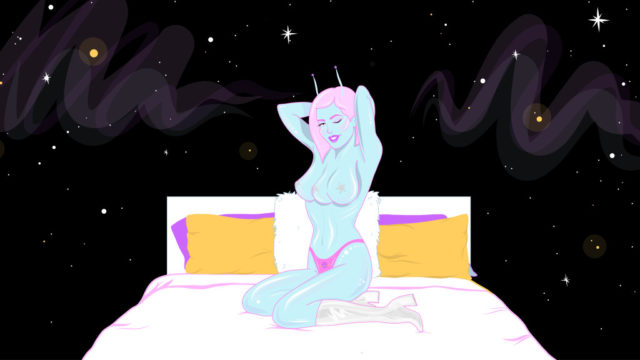 According to the late CDB Bryan, a journalist who chronicled tales of purported meetings with extraterrestrials in the book Close Encounters of the Fourth Kind: Alien Abduction, UFOs and the Conference at M.I.T., 43 percent of all reported alien encounters in the United States are with so-called “grey aliens”—thin, silvery beings with smooth skin, no hair, giant heads, slanted eyes and no sex organs. These same creatures were the ones that supposedly crash-landed in Roswell, New Mexico, 70 years ago, in 1947, spawning the alleged creation of the secret government alien and UFO investigation group known as Majestic Twelve.

The FBI has vehemently denied that Majestic Twelve ever existed—even going so far as to scrawl BOGUS across all pages of the possibly faked government briefing—yet ufologists around the world have expressed skepticism of the Bureau’s rejection. Chief among the concerns? Nothing in the documents about Majestic Twelve was actually redacted or blacked out—just noted as bogus—and if the FBI wanted to fool people into thinking something was fake, it definitely wouldn’t redact anything. Throughout the years, other documents have popped up as well (all of them supposed fakes, in the FBI’s opinion) that, if real, would confirm the existence of the elite group.

Regardless of whether the Majestic Twelve ever existed, extraterrestrial enthusiasts almost always disagree on one key feature of alien anatomy: the creatures absolutelyhave sex organs. In fact, those organs have spawned entire lines of sex toys, erotica, and roleplay scenarios, and a select group of people even claim to have seen them up close.

In the minds of exophiliacs around the world, aliens are more than just a curiosity. They’re a dream sexual partner.

In the minds of exophiliacs around the world, aliens are more than just a curiosity. They’re a dream sexual partner.

For James from New Jersey, a fetishist who didn’t want to share his last name, it’s mostly the physical aspect that attracts him to aliens: “Humans are beautiful creatures already, but they’re bland in comparison to aliens,” he says. “I guess the best way I can explain it is to compare it to ice cream; why settle for plain vanilla when you could have chocolate chip cookie dough covered in caramel, whipped cream and sprinkles?”

Charlie (whose name has been changed out of concerns for privacy) from Northern California feels the same way; the unknown and fantastical iterations of what extraterrestrial creatures might look like are one of their main draws. “Aliens provide a platform for morphological variation, such as tails, wings, tentacles or different body structures,” Charlie says. “Aliens can be monstrously large or deviously diminutive.”

Charlie is mainly interested in the psychological dimension of alien fantasy, saying “feelings of alienation, feeling apart from society or humanity, as well as fear of cold and distant scrutiny as with scientific experimentation drives my fascination with alien sexual subjects. The vast gulf between me and alien life fixates on [the] separation I feel from society or normalcy, while the detached, scientific explorer attitude ascribed to aliens by popular media creates an evocative power dynamic, between tormentor and subject.”

Rob (also not his real name) from the Midwest is similarly attracted to the unknown, sparked by an interest in popular sci-fi shows, and his main sexual fantasy reflects that. He imagines being a space explorer, traveling the universe and seducing aliens of all different colors and anatomies. For James, it’s a bit more specific; his ultimate desire is to have a passionate evening with an Argonian from the Elder Scrolls series. He’s drawn to the crocodile-like features and fantasizes about being on the receiving end of a “tailjob.”

James and Rob don’t use toys to explore their fantasies—not yet, at least, though Rob is open to the idea—but Charlie has used ropes to simulate alien tentacles and anal toys to fabricate probing. None of the three, however, have actually played out this fantasy with a partner. Rob is concerned a lover might think it too strange to paint their skin and roleplay, and is afraid he’d be ostracized for it. Charlie prefers to keep the fantasy in the sphere of imagination, feeling that any effort to simulate the experience in real life would be too artificial to be appealing. For James, it’s all about a potential feeling that can’t be mimicked accurately.

“Part of the appeal from alien women comes from the things they could do with their special parts, such as licking me with a long tongue or caressing me with slimy tentacles, which effects make-up can’t properly replicate,” he said. He thinks toys would do a poor job of it as well.

Rob is concerned a lover might think it too strange to paint their skin and roleplay, and is afraid he’d be ostracized for it.

For women, however, there’s an entire line of toys just for this fetish. Say hello to the Ovipositor by Primal Hardwere, a line of six dildo-like toys designed to simulate an alien implanting eggs into someone’s body. It’s mostly used by women who want to feel a big alien member thrusting some mushy, pre-birth alien babies into their nether-bits—in this case, that means gelatin eggs shoved through a silicon tube with the help of lots of lube and maybe a partner to assist in roleplay. Reviews of the toys actually recommend a partner, noting that the ovipositors themselves don’t really have much stimulating power on their own; they’re basically smooth, slightly veined or ribbed floppy tubes with adornments here and there to make them look more “alien,” but which deflate without any gelatin eggs to push through. The result of implantation is what some call a pleasantly full feeling, similar to juggling a bunch of ben wa balls inside that then melt away with body heat.

A handful of people around the world don’t need ovipositors, roleplay or even erotic stories about being the universe’s best sex worker for aliens. That’s because they claim to have their own actual experiences of being abducted and (somewhat) seduced. One of the most well-known is Peter Khoury, who claims two alien women—one of whom looked Nordic and the other Asian—came to him in his bed, naked, and forced themselves on him. He accidentally bit off the Nordic one’s nipple, causing the two to vanish—but not without leaving a strange piece of blonde hair wrapped around Khoury’s foreskin. Scientific testing suggests it comes from one of the rarest human lineages.

There’s also a whole slew of half-alien, half-human babies either already born or on the path to it. Simon Parkes, a city councilor in the United Kingdom, claims to have had an ongoing sexual relationship with an alien woman he called the Cat Queen, who gave birth to a daughter he named Zarka. There’s the 50 or so half-alien children that New Jersey-based David Huggins claims to have with an ET named Crescent, and the small gray baby fathered by alien Myriko and his human partner, who goes by Suzanne Brown. And then there’s the woman who met her four alien children during an abduction, the Chinese man who had levitating sex for 40 minutes with an alien woman and the Brazilian farmer who impregnated an alien by letting her bite his chin.

It’s a widespread, if entirely unproven, phenomenon. The Hybrid Children Community is an organization formed by parents of supposedly human-and-ET blended-DNA children who currently live in another dimension. HCC is working toward making the world a more harmonious place so they can eventually enjoy lives with their intergalactic families reunited. For some, it’s a fetish come true.