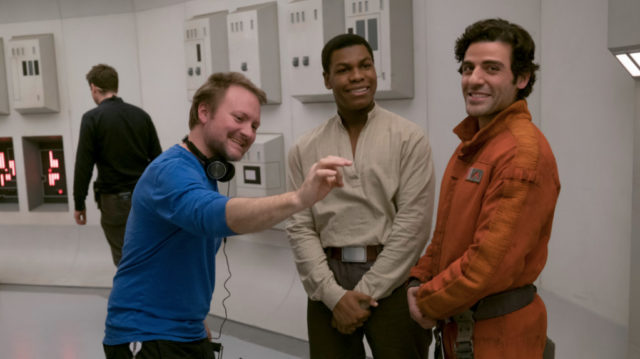 Directing a Star Wars movie has become kind of like being a contestant on Survivor. Directors Phil Lord and Chris Miller got voted off the island and replaced by Ron Howard halfway into production of the standalone Han Solo movie (which we’ve since learned is called Solo: A Star Wars Story), while Colin Trevorrow got the axe before he even had the chance to shoot a single frame of Episode IX (he was eventually replaced by The Force Awakens helmer JJ Abrams). Even Gareth Edwards — who was actually allowed to finish directing Rogue One had to watch from the sidelines as Tony Gilroy swooped in to reshoot large chunks of his movie.

The upstart directors were replaced or sidelined because Lucasfilm boss Kathleen Kennedy lost faith in their ability to make something that would fit into Star Wars’ long-established template. Kennedy’s cutthroat approach to this new crop of Stars Warsmovies is proof that in this galaxy, no one is above the sanctity of the brand. So when Lucasfilm announced that Star Wars: The Last Jedi director, Rian Johnson, will be getting a “brand new” Star Wars trilogy “separate from the episodic Skywalker saga,” fans had more than one reason to celebrate.

Not only are we getting three Star Wars movies with brand new characters from a completely different corner of the universe, but Lucasfilm’s vote of confidence in Johnson is the most glaring proof yet, that The Last Jedi is really, really good. While we’re still a month away from its release, the advance buzz suggests that Johnson — who also wrote the script — has crafted something worthy of giving him the keys to a whole new franchise.

Unlike the other next gen Star Wars movies — whose productions were plagued by rumors of on set turmoil — The Last Jedi has avoided controversy from the beginning. “We all loved working with Rian on The Last Jedi,” Lucasfilm president Kathleen Kennedy echoed in a statement. “He’s a creative force, and watching him craft The Last Jedi from start to finish was one of the great joys of my career. Rian will do amazing things with the blank canvas of this new trilogy.”

Johnson will write and direct the first installment of the new trilogy, and develop the rest with his longtime producing partner, Ram Bergman. Lucasfilm has made it very clear that it plans on releasing at least one new Star Wars movie a year, and with the Skywalker saga coming to an end in 2019, this new trilogy could inherit its place as the Star Wars cinematic universe’s central story.

If anyone has the singular vision required to essentially dream up an entire world from scratch, it’s Johnson. He was responsible for some of the best episodes of Breaking Bad — including “Ozymandias” — and his 2002 thriller Looper, remains one of this generation’s most original and intelligent pieces of science fiction.

Now he’s being asked to do something similar to what Christopher Nolan did with his Batman trilogy — take something that’s deeply embedded in our cultural memory and make it feel entirely new. It won’t be easy, but he’s already convinced Kennedy that he’s the man for the job. In just over a month, Johnson will get his chance to convince the rest of us, too.